About Us
|
Our History
|
Why Choose Us
|
Testimonials
|
Contact Us

 The Exeter Church of God. Leamon served in the U.S. Army Mortuary system in Germany and Vietnam, before returning to Exeter in February of 1971.

At that time, he began working with the Evans Family at Evans-Miller Chapel. He was offered a position at Miller Memorial Chapel in Visalia and worked with the Miller family until they sold the business in March of 1996, to a major corporation. In October of 1998, he left Miller Chapel to open Smith Family Chapel, 505 E. Pine St., formerly Hadley Funeral Chapel that was originally built and operated by the Hadley family, in Exeter.

The building and grounds have been restored. In addition, Their daughter Julie Smith-Reetz, a licensed cosmetologist and make-up artist, and her husband Tom Reetz work along side Leamon and Sandi Smith to offer their families the most intimate care and trust they are needing during their most difficult time. When you walk in the front door at Smith Family Chapel, you will always be greeted with a loving smile by Penny Case, a Long Time Exeter and Visalia Resident or by Jim Tredway, another long time Exeter resident. We at Smith Family Chapel are here for all of our families and make sure they feel like family

Leamon and Sandi also have two sons, Don and Harold Smith with their families that moved to Exeter from Visalia.

Leamon and Sandi have over 30 years in funeral service. "We try and assist the families with every aspect of death, with care and concern only a family can give." 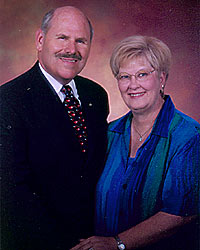 About Us
Our History
Why Choose Us
Testimonials
Contact Us