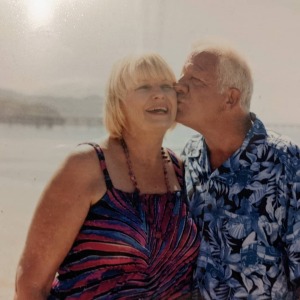 James Edward Johnson, 68, of Exeter, California passed away on June 20, 2021 after a long battle with esophageal cancer.
The son of Malcolm and Patricia Johnson, he was born in Montebello, California on October 10, 1952. James graduated from Lindsay High School in 1970. He was a printer and manager at Sequoia Pacific Systems in Exeter and retired after a 35 year career. James was married to Debbie (Freeman) Johnson of Porterville for almost 43 years.
Known as Jim or Jimmy to most, he loved the beach and being on the water. In his younger years, he enjoyed scuba diving off the coast of California and the Sea of Cortez. He also owned a house boat on Lake Kaweah. After Debbie retired, they sold their house in the country and moved into town. You could always spot Jim wearing a Hawaiian shirt, cruising in his Chevy.
Jim will be deeply missed by his family and friends. He is survived by his loving wife, Debbie and his children, Patti Martinez (Mike) of Lindsay, Michael Rector of Visalia, and Lauren TerHune (Dustin) of Washington, his grandchildren, great grandchildren, niece and nephews.
Jim was a quiet man with a fantastic laugh. He didn't like being the center of attention and per his wishes there will be no services. His ashes will be spread on the central coast of California with his family at a later date.

To send flowers to the family or plant a tree in memory of James Edward Johnson, please visit our floral store.

You can still show your support by sending flowers directly to the family, or by planting a memorial tree in the memory of James Edward Johnson