Plant a tree in memory of Erma
An environmentally-friendly option 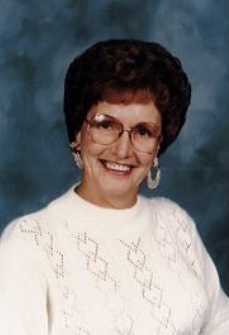 Erma Lee Edwards, a strong confidant loving mother and long-time friendly face in Exeter, went to be with the Lord on Wednesday, April 7, 2021. She lost a battle with cancer that she fought on her own terms. She was born in Houston, MO on October 15, 1939, she was 81.

Erma was the daughter of Wrietha and Buck Upton, both deceased; the family moved to the Central Valley when she was 7. She was a graduate of Exeter Union High School. As a young woman she was a popular waitress at Carl’s Diner and later became a much-loved checker at Nickel’s Payless grocery store until retirement. She loved helping people in need, and was a strong, powerful, determined single mom in an age where women like her weren’t given the same breaks as single men.

Erma was baptized at 8 years old in the Exeter Church of the Nazarene and more recently in the bathtub of her long-time Exeter home.

Survivors include her children: Scott (and Truanna) Nickel of Topeka, KS, Lonna (and Rowdy) Lewis of Visalia, and Leighann (and Scott) Lee of Colorado Springs, CO. Her sister is Carolyn (and Carol) Rainwater of Clovis. Grandchildren include Aaron Nickel, Jonathan Nickel, Kelsey Nickel, Rusty Lewis, Justin (and Kelsey) Kane, and 2 great-grandchildren, Nolan and Amelia.

Instead of flowers, Erma would appreciate memorials go to The Exeter Church of the Nazarene. Service time and dates are pending.

Plant a tree in memory of Erma by clicking here.
To send flowers to Erma's family, please visit our floral store.

A service summary is not available

Plant a tree in memory of Erma
An environmentally-friendly option

Plant a tree in memory of Erma

1 tree planted in memory of Erma

Erma and I would run into each other about once a year.  She always asked about my family by name and I hers.  We would catch up and promise to get together.  We had daughters that graduated the same year and yes she was a beloved checker at Nickel's Payless.  Erma I am going to miss seeing you and catching up,  We will meet again, friend.  My heart goes out to the family and you are in my prayers.  I will meet you again, my friend.    Donna Kling

Erma was a beautiful person always had a smile. She was so very kind and had a big heart. Sending prayers to the family. God Bless 🙏🏻🙏🏻

So sorry to hear of Erma's passing. We had just reconnected at church after many years not seeing each other. In my prayers to family

A Memorial Tree was planted for Erma Lee Edwards

Plant a tree in memory of Erma